In celebration of  our founder and social justice trailblazer Luis Garden Acosta El Puente is launching a Legacy Campaign to honor Luis as well as preserve and sustain the collective legacy of Luis and co-founders Dr. Frances Lucerna and Eugenio “Gino” Maldonado. The Legacy Campaign will incorporate two components:

Our goal is to raise funding that will support El Puente's long-term sustainability and establish a reserve fund (Board designated) that will invest in the growth and expansion of our ongoing global social justice leadership initiatives such as:

We will also acknowledge the many ways Luis will be honored by other organizations impacted and inspired by his legacy.

"What is it to live a courageous life" 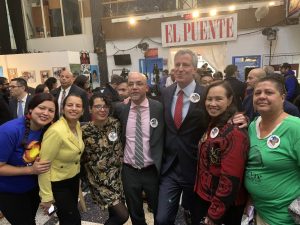 El Puente hosted the signing of  Landmark Legislation to reform the Commercial Waste Collection Industry. The historic and groundbreaking commercial waste zones bill was championed by Councilmember Antonio Reynoso and received unwavering support from Mayor Bill de Blasio. El Puente was chosen as the host site because of its nationally recognized environmental justice legacy and… 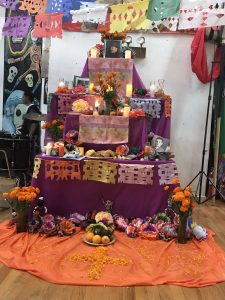 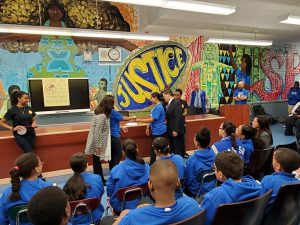 In honor of this anniversary, the nationally awarded poet, Martín Espada, wrote a moving poem  “Morir Soñando”  for his dear friend and mentor, Luis. The poem is published on the online magazine Rattle with an audio reading of the poem by Martín.

Click the links below to read or listen to the poem.

I saw the empty cross atop the empty church on South 4th Street, as if Jesus
flapped his arms and flew away, spooked by one ambulance siren too many.
I saw the stained glass windows I wanted to break with a brick, the mural
of Saint Mary and the Angels hovering innocent as spies over the congregation,
and wanted to know why you brought me here, the son of a man punched
in the face by a priest for questioning the Trinity, who punched him back.
This is El Puente, you said. The Bridge. I knew about the Williamsburg Bridge,
eight lanes of traffic and the subway stampeding in the open windows of the barrio
all summer. You spread your arms in that abandoned church and saw the spinning
of a carousel better than any wooden horses pumping up and down at Coney Island:
here the ESL classes for the neighbors cursed with swollen tongues in English;
there the clinics on contraception, the pestilence in the veins of the unsuspecting;
here the karate lessons, feet spearing the air to keep schoolyard demons away;
there the dancers in white, swirling their skirts to the drumming of bomba;
here the workshops on Puerto Rican history, La Masacre de Ponce where your
mother’s beloved painted his last words on the street with a fingertip of blood.
I was a law student, first year, memorizing law school Latin, listening to classical
guitar on my boom box as I studied the rules of property: It’s mine. It’s not yours.
I saw only what could be proven by a preponderance of the evidence: the church
abandoned by the church, the cross atop the church abandoned by the Son of God.
My belly empty as Saint Mary of the Angels, I told you I was hungry, and we left.
I wanted Chinese food, but you told me about the Chinese take-out down the block
where you stood behind a man who shrieked about the price of wonton soup,
left and returned with a can of gasoline, splashed it on the floor and pulled a box
of kitchen matches from his pocket. Will you wait till I pick up my egg roll and pork
fried rice? you said, with a high school teacher’s exasperated authority, so he did.
You could talk an arsonist into postponing his inferno till you left with lunch,
but you couldn’t raise the dead in the ER at Greenpoint Hospital, even in your suit
and tie. You couldn’t convince the girl called Sugar to rise from the gurney after
the gunshot drained the blood from her body. You couldn’t persuade the doctor who
peeled his gloves and shook his head to bring her back to life, telling him do it again,
an arsonist in medical scrubs trying to strike a wet match. You couldn’t jumpstart
the calliope in her heart so the carousel of horses would rise and fall and rise again.
Whenever you saw the gutted church, you would see the sheets of the gurney
dipped in red, all the gurneys rolling into the ER with a sacrifice of adolescents.
We walked to the luncheonette on Havemeyer Street. A red awning announced
Morir Soñando. To Die Dreaming, you said, from the DR, my mother’s island.
The boy at the counter who spoke no English, brown as my father, called Martín
like me, grinned the way you grinned at El Puente, once Saint Mary of the Angels.
He squeezed the oranges into a drizzle of juice with evaporated milk, cane sugar
and ice, shook the elixir and poured it till the froth spilled over the lip of the glass.
Foam freckled my snout as I raised my hand for another. Intoxicated by morir
soñando number three and the prophet gently rocking at my table, I had a vision:
ESL classes healing the jaws wired shut by English, clinics full of adolescents
studying the secrets of the body unspeakable in the kitchen or the confessional,
karate students landing bare feet on the mat with a thump and grunt in unison,
bomba dancers twirling to a song in praise of Yoruba gods abolished by the priests,
the words of Puerto Rican rebels painted on the walls by brushes dipped in every
color, pressed in the pages of notebooks by a generation condemned to amnesia.
Morir soñando: Luis, I know you died dreaming of South 4th Street, the banners
that said no to the toxic waste plant down the block or the Navy bombarding
an island of fishermen for target practice thousands of miles away. Morir soñando:
I know you died dreaming of vejigantes, carnival máscaras bristling with horns
that dangled with the angels at El Puente. Morir soñando: I know you died dreaming
of the next El Puente. Morir soñando: I know you died dreaming of the hammer’s claw,
the drill whining to the screw, the dust like snow in a globe, then the shy genius
raising her hand in the back of the room. Morir soñando: I know you died dreaming
of the poets who stank of weed in the parking lot, then stood before the mike
you electrified for them and rubbed their eyes when the faces in their poems
crowded there, waiting for the first word, so we could all die dreaming, morir
soñando, intoxicated by the elixir of the tongue, oh rocking prophet at my table.

Martín Espada: “This poem is an elegy for a dear friend and mentor, written to mark the first anniversary of his death on January 8th. Luis Garden Acosta, through his activism, organizing and vision, not only changed his community in Brooklyn, but the lives of untold thousands like me."